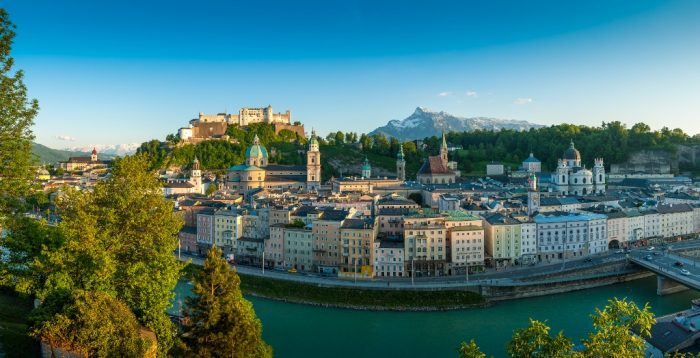 Year for year the world famous cultural high point in Austria is the Salzburg Festival. In the summer the festival transforms the city of Mozart into one immense stage – for several weeks between 18. July – 30. August.

Around 200 events (operas, plays, concerts) are staged within the framework of the Salzburg Festival. International stars such as Anna Netrebko, Rolando Villazón and Placido Domingo attract opera, concert and theatre lovers. Also high society meets there, enjoying the supreme quality of the performances and the harmonious combination of tradition and modernity.

The moraliy play ’Everyman‘ is the most renowned event of the Salzburg Festival period. It is performed on Domplatz square against the magnificent background of the cathedral entrance.

Other unique venues such as the Large Festival Hall, the mountainside Felsenreitschule or the House of Mozart give the performers a perfect stage.

For those who don’t manage to obtain tickets, there’s always the Siemens Festival Nights on Kapitelplatz square, featuring large screen outdoor showings of the great opera and concert evenings and of current performances.

All residents and guests of the city are invited to celebrate the opening weekend of the festival with a virtual firework of art – the performance venues is open to the public and music can be heard at many other places. All of Salzburg will be a stage then!

There is another very special event that takes place in the historic center of Salzburg, on Residence Square – the Fackeltanz (torch dance). Folk groups swing torches to the music during the ceremony for the festival opening. They are creating different figures in the darkness of night – it is a very impressing tradition! Guests and visitors of the wonderful baroque city Salzburg can be sure to find a wide range of cultural events Find more about the Unesco world heritage at Salzburg – Baroque Glory