The city of Salzburg as a festival stage, must see! 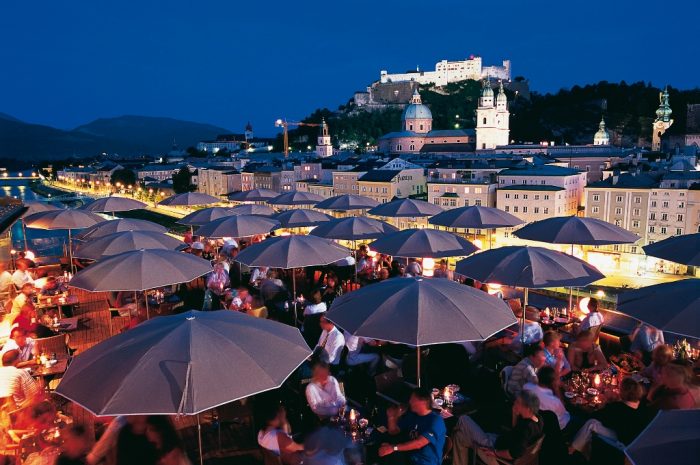 The famous Salzburg Festival was founded in 1920 by Hugo von Hofmannsthal, Max Reinhardt and Richard Strauss that were guided by the vision of “the city as a stage”.

The famous Salzburg Festivals offers a more comprehensive program than any other festival from midth of July till end of August. It takes place under the artistic leadership of Markus Hinterhäuser.

Salzburg Festival-The city as a stage

Update 2021
Please find the updated information and program of the festival season 17. July – 31. August 2021 on the official Salzburger Festspiele website.

In 2019 the focus of the program is in the myths from antiquity, which the Festival co-founder Hugo von Hofmannsthal saw as a ‚magic mirror‘. Mythical tales from long ago still raise ever-relevant quesions about human existence. The opening premiere will be Mozart’s ‚Idomeneo‘, followed by the big opera highlights: ‚Médée‘ by Luigi Cherubini, ‚Alcina‘ by Georg Friedrich Händel, ‚OEdipe‘ by George Enescu, ‚Orphée aux Enfers‘ by Jacques Offenbach, ‚Simon Boccanegra‘ by Giuseppe Verdi, ‚Salome‘ by Richard Strauss, ‚Adriana Lecouvreur‘ by Francesco Cilea and ‚Luisa Miller‘ by Giuseppe Verdi.

The drama programme will also engage with myths. The world premiere of Theresia Walser’s ‚Die Empörten‘ (The Outraged Ones) transposes the elemental conflict between Antigone and Creon to a contemporary setting. Find the complete drama programme and all performances.

The Festival’s traditional play, Hugo von Hofmannsthal’s “Jedermann”(Everyman), is performed on the Cathedral Square stage as every year and with a cast of prominent stars. The Play about the Death of the Rich Man is performed with Tobias Moretti (Everyman) and Valery Tscheplanowa (Paramour).

There is also a focus on concerts with a series of sacred music, the Ouverture spirituelle. In these concerts pain, grief and tears take on musical form.

The Salzburg Festival offers also many exciting options to young people that are interested in the fields of art and culture. There are special opera productions for children and Opera Camps for the youngest audience.

Read more about the ancient city of Salzburg as an Unesco world heritage on: SALZBURG in its Baroque Glory. – Touristic information you  can find on the official site.