The Magic of Bulgaria – Bourgas region 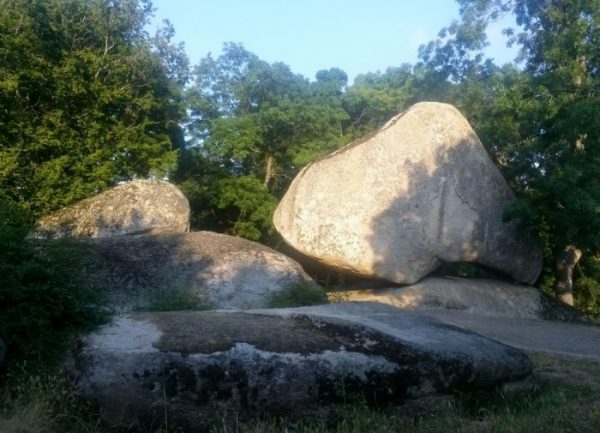 On a 4 days expedition tour in Bulgaria from Bourgas bay to Strandzha mountains, to the sites and hidden archeological places.

A press trip showed me the remarkably cultural project “Magic of ancient times and beauty of nature“.

The regional center of Bourgas is surrounded by three lakes. Their shores are covered with dense green vegetation, mostly reeds and cattails, inhabited by rare animal species.
The Bourgas Bay is the largest bay of the Bulgarian Black Sea coast. It is 41 km wide and the sand around it looks almost black because of the high content of iron, manganese and magnesium. In its environs there is a romantic little island Saint Anastasia. It is located about 7 km south-east of Bourgas reachable by ship.

Its history is shrouded in mystery and legends of treasures and pirates. At its highest point there is situated the most preserved monastery complex in Bulgaria. It dates its founding about the XII-XIV century. In the period 1923-25 the monastery complex was turned into a prison for sentenced political activists.

The region from Bourgas Bay to the Strandzha Mountain is distinguished for its extremely rich bio-diversity. This is thanks to its specific geological past, favorable climate and geographic position. A large part of the unique vegetation of Strandzha has survived to the present day from pre-historic times, thanks to the fact that the extreme conditions in Europe during the Quaternary Period did not affect the mountain, allowing the flora to survive since the Ice Age.

South of the city of Bourgas around the flow of the Madrensko Lake toward Black Sea there is the Nature Conservation Center “Poda”, an area that is protecting birds and their habitats. One can observe about 260 types of water swimming and singing. Over this area there is the second largest in Europe emigrational road of the birds. Every year in August about 250.000 white storks gather in this region to start their big journey.

The wild nature at the reserve of the Ropotamo River offers a bio-diversity of the flora and fauna. The banks of the river are covered with thick longoz forests and water lilies and reeds grow in the water. On the way to its mouth where it flows into the Black Sea, the river passes through scenic areas with rich vegetation, which strongly resembles the tropical. There are regular cruises with tourist boats until the mouth.

Strandszha Mountain is one of locations in South-Eastern Europe, where one can see some of the best specimens of the megalith civilization dating from the early Iron Age (12th-14th century B.C.).

They are represented by dolmens and stone sanctuaries. The local population calls them dragon houses. It is interesting to note that there is a build-up of several dolmens, concentrated around the villages. There are myths that at certain point these have been the dwellings of winged giants – dragons with human face, who would kidnap beautiful girls. The dolmens, uncovered up to now in the Bulgarian part of the mountain, are more than 100.

The dolmens are funeral facilities, prototypes of the Thracian tombs. They belong to the megalith culture, dating back to the early Iron Age XII – VI century B.C. They are built of huge stones roughly handed by human hands. They include corridors and chambers and are covered with mounds of stones and earth. These dolmens are religiously significant as they are presumed to the primitive herons or temples of the solarchtonic imperial cult among the local Thracian population.

There are several cult places in the region of the town Primorsko where people in the ancient times worshipped and turned to their sacred places of worship and prayer. One of these is the rock formation of Stone mushroom called Beglik Tash is located around ten kilometers from the town of Maliko Tarnovo. Once there was also an ancient temple in which the Thracians had greeted the rising of God Sun on the day of summer solstice. This megalithic temple is often referred to as the “Bulgarian Stonehenge”. It is assumed that it was created around the XIV century B.C., performing the functions of a temple, a rocky calendar and a sundial. The impressive huge stones, spanning over a broad meadow near a dense forest next to the ruins of the ancient town of Ranuli, have not yet revealed all their secrets. There are assumptions as well that it is a sanctuary of Dionysus or about the existence of an ancient observatory.

About 3 km south-west of the small town Malko Tarnovo in immediate proximity to the border with Turkey is one of the most interesting monuments of the ancient Thracian culture in the region. It is the cult complex Mishkova niva.
It really takes a good SUV to reach this hidden mystical place in the wilderness. This place is connected with myths for a tomb of a goddess. The imposing cult building has been tomb of a Thracians tribal leader, priest and hero and later, his mausoleum was later converted into a temple dedicated to the god Apollo. The date of the monument could be related to V-III century B.C. and the end date until II-III A.D. The archeological complex is including also a sanctuary, fortified building, a fortress, a hill necropolis and antic water pipelines. Many legends tell about hidden treasures and there are still many secrets behind this mystic place.

About 20 km south-west from Bourgas, located near the village Debelt, there is the national archeological reserve Deultum. The village of Debelt exists still from times of Roman Empire, when it has got this name. The village is object of archeological researches. Here, in the antiquity period there was established the Thracian settlement of Dovelt, which for two millennia has been one of the important economic centers of South-Eastern Thrace. As a result from the lively commerce which was going on around its ports, nowadays there were found hundreds of amphora seals and lots of cult objects. Visitors can see the exhibition in the open air, the antique baths, the temple of Asclepius and the emperor’s cult, as well the fortress walls and gates of the Byzantines, the military garrison from the beginning of the 6ht century.

The village of Brashlyan in the Strandzha Mountains of Bulgaria with its old simple houses offers 9 of them to visitors because they are of architectural significance. They are designed in the architecture style typical of Strandzha house architecture, made of stones and wood with preserved authentic interior.
Several ethnographic museums are presenting everyday life and crafts in the villages from the 19th century on.

Since the 10th century one of the traditional crafts of Bulgaria is making articles of unwoven textile, the so-called “plasti” (felt). Strandzha is one of the regions, where this ancient art has been preserved up to the present. In workshops the women from the villages spin by hand and then color with natural dyes their produce. Colors are obtained from various leaves, roots, flowers and stems and wool is purchased from the local shepherds.

This journey to Bulgaria Bourgas region offered us great insights into the cultural treasures and fascinating impressions of this Bulgarian region – we have the desire to come back again.

Read more about the fascinating culture of the Thracians in Bulgaria on this blog and about the Bulgarian capital Sofia with the most important historical sights (in German language) Sofia Sehenswürdigkeiten, Top Tipps

Find more about the tourism country Bulgaria on the official website.