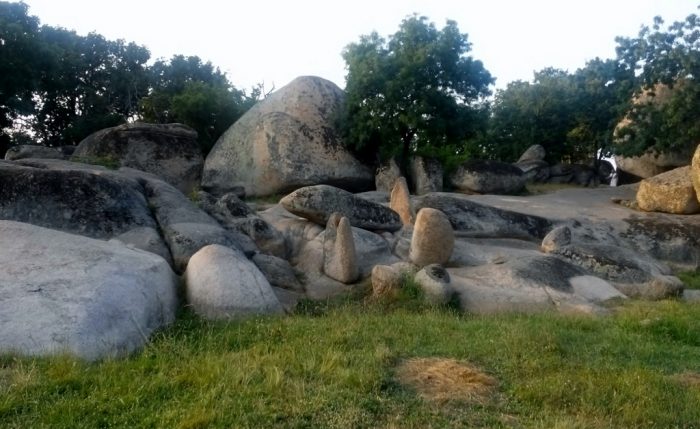 The Strandszha Mountain is one of the locations in South-Eastern Europe, where one can see some of the best specimens of the Thracian culture.

A presstrip to the south of Bulgaria led me to the traces of the mysterious Thracian culture. It’s a megalithic civilization dating from the early Iron Age (12th-14th century B.C.).

They are represented by dolmens and stone sanctuaries. The local population calls them dragon houses. It is interesting to note that there is a build-up of several dolmens, concentrated around the villages. There are myths that at certain point these have been the dwellings of winged giants – dragons with human face, who would kidnap beautiful girls.

The dolmens, uncovered up to now in the Bulgarian part of the mountain, are more than 100. The dolmes are funeral places, prototypes of the Thracian tombs.

They belong to the megalith culture, dating back to the early Iron Age XII – VI century B.C.- They are built of huge stones roughly handed by human hands. They include corridors and chambers and are covered with mounds of stones and earth.

There are several Thracian cult places in the region of the town Primorsko where people in the ancient times worshipped and turned to their sacred places of worship and prayer. One of these is the rock formation of Stone mushroom called Beglik Tash is located around ten kilometers from the town of Maliko Tarnovo.

Once there was also an ancient temple in which the Thracians had greeted the rising of God Sun on the day of summer solstice. This megalithic temple is often referred to as the “Bulgarian Stonehenge”. It is assumed that it was created around the XIV century B.C., performing the functions of a temple, a rocky calendar and a sundial.

The impressive huge stones, spanning over a broad meadow near a dense forest next to the ruins of the ancient town of Ranuli, have not yet revealed all their secrets. There are assumptions as well that it is a sanctuary of Dionysus or about the existence of an ancient observatory.

About 3 km south-west of the small town Malko Tarnovo in immediate proximity to the border with Turkey is one of the most interesting monuments of the ancient Thracian culture in the region. It is the cult complex Mishkova niva.

It really takes a good SUV to reach this hidden mystical place in the wilderness of Bulgaria. This place is connected with myths for a tomb of a goddess.

The imposing cult building has been tomb of a Thracian tribal leader, priest and hero and later, his mausoleum was later converted into a temple dedicated to the god Apollo.

The date of the monument could be related to V-III century B.C. and the end date until II-III A.D. The archeological complex is including also a sanctuary, fortified building, a fortress, a hill necropolis and antic water pipelines. Many legends tell about hidden treasures and there are still many secrets behind this mystic place. Bulgaria is still a big mystery!

Read more about the The Magic of Bulgaria

Find more interesting articles with many tipps in German language about the culture of Bulgaria, the fascinting capital city Sofia and the cultural capital city 2019 Plovdiv and about the ancient town Veliko Tarnovo.